This edition of our Tuesday Contributor series is written by Irene Nissen, a local craft enthusiast who attends Napa of Beer events with her husband Mark.  See her first article on where to find Gluten Free beers in Fort Collins, here

My husband, Mark, and I had the opportunity to attend a preview event for the upcoming Chipotle Cultivate Festival, which will be taking place on Saturday, August 17th from 11 AM to 7 PM in DenverCityPark in The Meadow. According to the official media release, the festival will include cooking demonstrations by celebrity chefs, live music, local food artisans, regional beer and wines, a special Chipotle festival menu, and other activities emphasizing fresh and affordable food made with sustainable ingredients. Chipotle created the Cultivate Festival in 2011 as a way to raise awareness of the impact food has on society. The festival is intended to get people thinking and talking about food and food issues.

This is the 2nd year this festival has taken place in Denver and for the 1st time this year Chipotle partnered with Great Divide to brew an exclusive beer for the festival. We spoke with Doug Christie, a Marketing Representative for Great Divide, about the beer and why Great Divide was chosen. 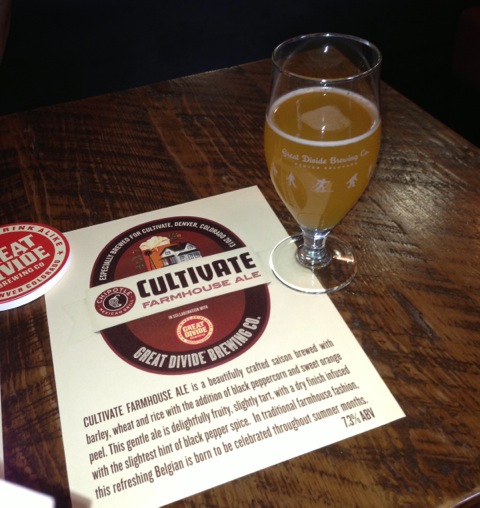 One of Great Divides regular beers is their Colette, a Saison/Farmhouse style ale. According to Doug, Chipotle approached Great Divide to ask if they would brew the Cultivate Beer for this year’s festival. This decision was in part because of their Colette brew, as well as the size of the brewery being able to supply enough volume for the festival.

Chipotle gave Great Divide complete creative freedom with the brewing process; the only direction was to make a farmhouse style ale. The brewers at Great Divide had been interested in making a Saison using black peppercorn and Orange Peel and this was their inspiration for Cultivate. The result was a Saison brewed with barley, wheat and rice with the addition of black peppercorn and sweet orange peel. According to the media release:

“This exclusive ale is delightfully fruity and slightly tart, with a dry finish infused with the slightest hint of black pepper spice. In traditional farmhouse fashion, this refreshing Belgian is born to be celebrated throughout summer months. 7.3% ABV. Cultivate Farmhouse Ale will only be available at Chipotle Cultivate Denver.”

We had the opportunity to sample the Cultivate brew along with a few of the other culinary/artisanal offerings that will be available at the festival. The beer itself was very balanced; it had a citrusy flavor following by a spicy peppercorn finish. We tried it along with the Chipotle Sofritas Tacos made with seasoned tofu meat. The tacos were delicious and you never would have guessed they were made with tofu! They were served in a 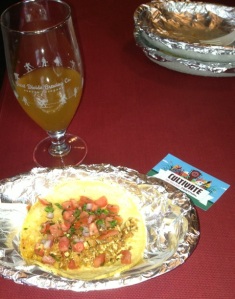 corn tortilla with some pico de gallo salsa making them gluten free and vegan, and we were even told that they were 100% organic as well! They had a great flavor and really brought out the citrus notes in the beer. These tacos have been on the menu in the California, Washington, and Oregon market for about 6 months and they are hoping to bring them to the Denver market in the near future. The tacos will be served at the Cultivate festival so make sure you give them a try!

We also sampled pickles from The Real Dill. They had four varieties to sample, Habanero Horseradish Dills, Jalapeno Honey Dills, Caraway Garlic Dills, and Titan Dills. We spoke with Tyler DuBois, the founder of The Real Dill and learned about his passion for pickling. Be grew up helping his grandmother can and pickle foods and found the process of taking a perishable item and preserving it truly magical. He learned the process of brewing while working as a brewer for Wynkoop. He decided he wanted to go into the business of producing gourmet pickles in the same fashion that craft beer is made and The Real Dill was born. He has been doing it for about a year and a half and still has a great passion for what he does and has formulated many great relationships, such as the one with Great Divide. For Tyler’s newest creation, The Titan, he worked 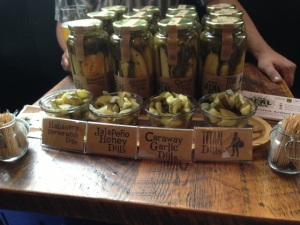 with the head brewer at Great Divide to device a pickle that was done in the same fashion as Great Divide’s Titan IPA. Fresh whole hops and malted barley were added along with fresh dill, Serrano peppers, onions, garlic and a little sugar. The Titan was by far our favorite; it was bursting with flavor and really brought out the peppercorn flavors in the Cultivate brew. The Real Dill pickles will be available at the Cultivate Festival, they are also available in Fort Collins at The Welsch Rabbit, Beaver’s Market, and The Fort Collins Food Co-Op.

For dessert we sampled a few Artisan Ice Pops from lix stix. We sampled the Colette Creamsicle made by fermenting navel oranges in the Collete Farmhouse Ale along with some pink peppercorn, mandarin oranges, cream and sweetened condensed milk. We sampled it along side the Colette Ale and you could really taste the notes of the beer in the bites of navel orange. We also tried the Ready for Yeti Fudgesicle made from the Great Divide Oatmeal Yeti Imperial Stout, milk, cream, chocolate, cocoa and 2 types of Sea Salt. There are no words to describe the yumminess of this creation! And along side a sample of the Yeti brew, 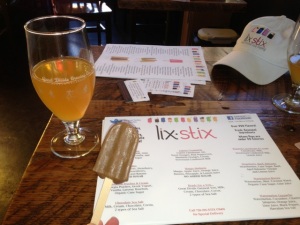 it was heaven! Just for fun we tried an Avocado Creamsicle made from avocado, coconut milk, lime juice, milk, vanilla and organic cane sugar. Not very many people were brave enough to give it a try, and I have to say, they were missing out! It was very creamy and delicious!! We also tried a few non-dairy pops, the Strawberry, Basil Balsamic made with Strawberries, Cane Sugar, Basil, Aged Balsamic Vinegar and lemon juice was delicious! The basil flavor really popped, but it was mellowed down by the sweet strawberry and balsamic vinegar flavors. Lastly we tried the Watermelon Gazpacho made from watermelon, cucumber, cilantro, jalapeño, orange juice, lime juice, black pepper, and Hawaiian sea salt. It was spicy and sweet, every few bites you would get a super spicy dose of jalapeño making it an adventurous choice!

We rounded out the evening with a scoop of salted cookies and cream ice cream and Carmel banana gelato from Little Man Ice Cream. If you haven’t tried Little Man Ice Cream yet, make a trip down to the LoHi district in Denver to check them out! They like to experiment with unique flavor creations and from what we sampled, I can’t image they make anything bad!

Don’t forget to check out the Cultivate Festival on Saturday, August 17th in Denver. It is the same weekend as New West Fest here in Fort Collins, but the festival starts at 11 AM, so if you have it in you, you could make a trip down to Cultivate in the morning and round out your evening at New West Fest!

More About Irene and Mark:

Mark and I have lived in Fort Collins for almost 8 years now. We moved here in 2005 to attend Colorado State and after graduating in 2009 we just couldn’t bring ourselves to leave! I work as a high school librarian at Rocky Mountain High School and also WORRY on the side (Wine, Om, Read, Run and Yoga). I recently graduated from my 200-hour 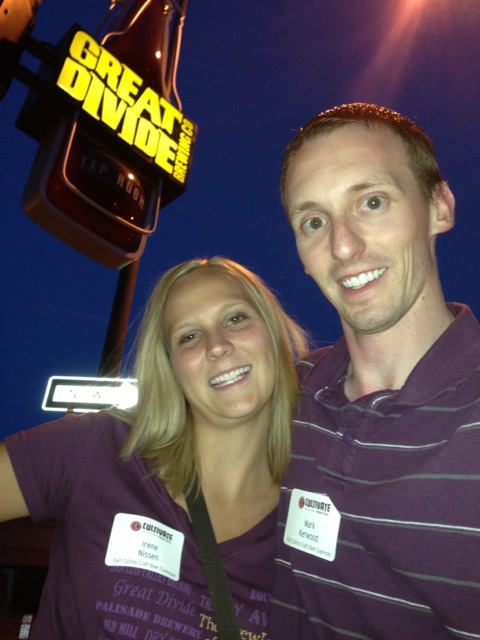 Yoga Teacher training and have been working to start up my own business WORRY Warrior, teaching yoga, selling essential oils and offering health coaching advise. Mark works for First National Wealth Management as a Portfolio Manager and enjoys unwinding at the end of the day with a good glass of wine or an IPA. We love spending time with our Great Dane Mini, and training for ½ marathon races in our free time.